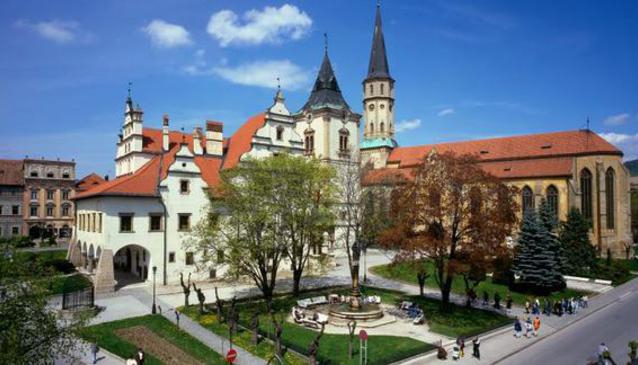 Directions to Historic Town of Levo?a

The town possesses an impressive number of architectural monuments linked with its glorious past.

The Spiš town of Levoča (population 14,500) situated in the east of Slovakia below the mountain range Levočské vrchy, because of its rich history, is one of the most visited by tourist in the country.

The city was first mentioned in a deed from 1249 as Leucha. The community, thriving on its advantageous position on the trade route Via Magna, rapidly grew into a town with several privileges. Shortly after, Levoča became the centre of German colonisation in the Spiš region and in 1271 it was even promoted to the capital of the Association of the Spiš Saxons, which eventually lost its influence and Levoča was declared the free royal borough in 1323.

The driving force of the Levoča's development was trade which gradually acquired an international dimension. The citizens of Levoča traded with Krakow, the Hanseatic towns and even with Venice. The craftsmen of Levoča produced not only for local consumption but also for the markets and fairs throughout Old Hungary and Poland. Later Levoča became one of the main centres of the Renaissance and humanism in Old Hungary.

The dominant part of the old Levoča is the large rectangular square, with the Roman-Catholic Church of St. James from the 14th century, which is one of the most important sacral buildings in Slovakia. The tall slender church tower from the first half of the 19th century is the most distinct feature in the city's silhouette.

Especially precious is the interior of the church, which is in fact a unique museum of medieval sacral art. The Late Gothic wooden main altar of St. James with the height of 18.6 meters (61 feet) is the highest of its kind in the world. It was made of lime wood in 1507-1517 in the workshop of Maestro Pavol of Levoča. Maestro Pavol is said to have depicted himself as one of the statues of the twelve apostles in the exquisite composition of the Last Supper scene in the altar's predella.

The church neighbours with the arcaded building of the former Town Hall which was built after the fire in 1550 and is one of the finest buildings of secular Renaissance architecture in Slovakia.

The so-called cage of opprobrium located in the square is from the 16th century and was used in the past as a pillory for the public humiliation. The central square is skirted by more than 50 remarkable burgher and patrician houses, many of which carry the name of their former owners. Of especial interest is Thurzo's house, which acquired its Neo-Renaissance sgraffito facade in 1904.

High above the town towers the Mariánska hora Mountain (781 m/2,562 ft). Every year at the beginning of July Levoča becomes the meeting point of the largest pilgrimage in Slovakia. Tens of thousands of pilgrims in long queues ascend to the mountain to render their gratitude to Virgin Mary in public services in the Neo-Gothic Church of the Visitation of the Virgin Mary from the beginning of the 20th century. The original pilgrim chapel was rebuilt into a small Gothic church in 1470. The interior of the new church contains the wonderful statue of the Virgin Mary which is now the main symbol of the pilgrimage to Levoča.

Levoča has been inscribed on the UNESCO World Heritage List since 2009.