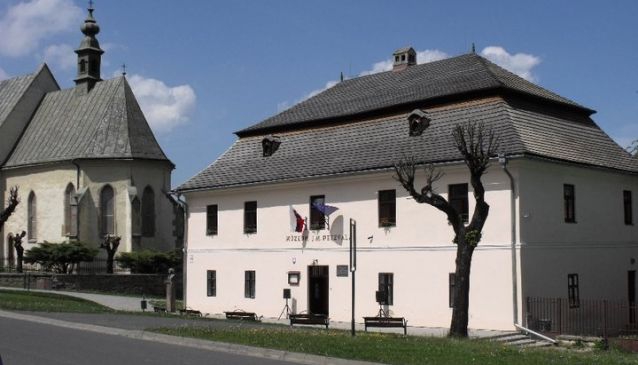 Prof. Dr. Jozef Maximilián Petzval (1807-1891) a mathematician, physicist, inventor, founder of the modern optics and photograph. He was born in Spišská Belá in the family of a teacher of Moravian origin. Petzval studied philosophy and later the Institute of Geometry in Pest, where in 1828 graduated and in 1832 he received a degree of a doctor. Since 1835 he was a professor at this University. In 1937 he went to the University of Vienna at the Department of Mathematics, where he taught till 1827.

He belongs among the most recognized European scientific personalities of the 19th century. He was the first who calculated exactly construction of photographic lens - for portrait and landscape. He invented the rules for optics that are valid until now. The museum in his native house was open for public in 1964.

Exterior - a late Renaissance building of a school, originally ground-floor with adaptations performed in the 18th century.

Museum - in the entrance of exhibition there are biographical data about J. M. Petzval. Then, there is a review of the first picture that was named a photograph in the 19th century. More than 600 exhibits proving the history of photographic optics are displayed. The documentation of Petzval's invents including a photocopy of the famous lens calculation is in the center of attention. The original of the calculation is in the archive of the firm Voigtländer in Braunschweig, Germany. In the foreground, there is a rare daguerreotypic apparatus with Petzval's lens. There is also a design of Petzval's lens with large lighting capacity for cinematographic projection, a model of the apparatus with its optics and various modifications of original Petzval's lens, procedure of two-eyepiece telescope constructions and other exhibits of solving the optic problem.

Exhibition chronologically illustrates the development of photo-optics from the first attempts to take a picture in 30s of the 19th century that is linked up with the company Niépce-Daugérre. In exhibition there are some valuable daguerreotypes. Out of the instrumental technique the well-known historical constructions of cameras including some unique samples are displayed here. A visitor can find here some rarities - detective chamber with a mechanism for plate exchange. Krugener's detective pocket chamber in the form of a book is also very unique.There are also specimens of the first reporter and traveling apparatus and also those from the beginnings of stereography. Collection of Kodaks first pocket cameras /Vest-Pocket-Kodak/ is displayed, too, as well collections of Czechoslovak products of Meopta Prerov and present cameras are installed here. A visitor has a possibility to be acquainted with the development of photographic aids from gasseous lamps to copy machines. An unique collection of camera caps is worth of seeing.A special part of exhibition is devoted to the beginnings of cinematography. There are also exhibits of various cine-cameras and projectors. The displayed exhibits are only a part of wide collecting depository of photographic and cinematographic technique placed in the depositories of the Slovak Technical Museum in Košice and it will be installed in a new exhibition of the history of photographic optics.