Walking in the Footsteps of Templars

Prehistoric findings show that the castle mound was already settled in the Bronze Age and Iron Age.

Chastity, poverty and obedience sworn since their formation in 1118 the Knights of the Order of the Temple, emblazoned with mysteries.

Rumours and legends of the knight’s order, their incredible wealth, boom and subsequent collapse and persecution of order leaders up to their physical liquidation, abolishment and dissolution of order are nowadays spread a lot, popular and enjoy a general popularity and many conspiracy theories. Rumours and legends of their wealth are grateful theme of fantasy books by various authors or film stories, which have recently ruptured full purse. Serious scholars of their history are more cautious in their statements, because to let fly own imagination is one thing and to stick to the known realities, facts and written documents of their times is a matter of a different nature.

This warlike Knight Order, whose primary and irreplaceable role was to protect pilgrims to the Holy Land, to provide them with help and support in various parts of the contemporary Christian world in their journey has already been said, written and filmed a lot.

Nothing is more impressive, and written into the consciousness of a human so steady, a the self-explanatory demonstration of their martial arts, rituals and scenes from the life of the then society. So, as presented by a group of volunteers in contemporary replicas of costumes, armour and weapons illustrating various scenes of their life on the basis of their actual, known life. Reconstructed Castle Strecno is at the beginning of the Strecno gorge viewing upwards the River Váh, on the left bank thereof, on the steep limestone rock in a height of about 420 m (1,378 ft).

Prehistoric findings show that the castle mound was already settled in the Bronze Age and Iron Age. Strecno was one of the royal castles. Although the first written mention of it came only from 1316, we can definitely assume that it was already built in the 13th century, i.e. at a time of the greatest expansion of that order, which also in Slovakia left permanent traces and artefacts.

The atmosphere of distant past breathes to us already at the entrance to the authentically reconstructed Castle Strecno . In front of the castle gate, three knights of the order in period costumes welcome us, two another are giving us the folders of organized event, the third one is proudly holding a white flag with a red cross, their principal, determining symbol. This is a successful action, the 4th Templar Venture, that takes part on ancient Slovak castles standing at the territory of Žilina self-governing region.

In the vicinity of the castle, and also behind a wooden bridge, there are their tents, and also the booths of contemporary craftsmen, sellers of keepsake souvenirs, vintners, but mainly bakers and cooks of contemporary meals who serve to the visitors to taste such an exotic medieval dishes, such e.g. the grapy sauce. It tasted great. 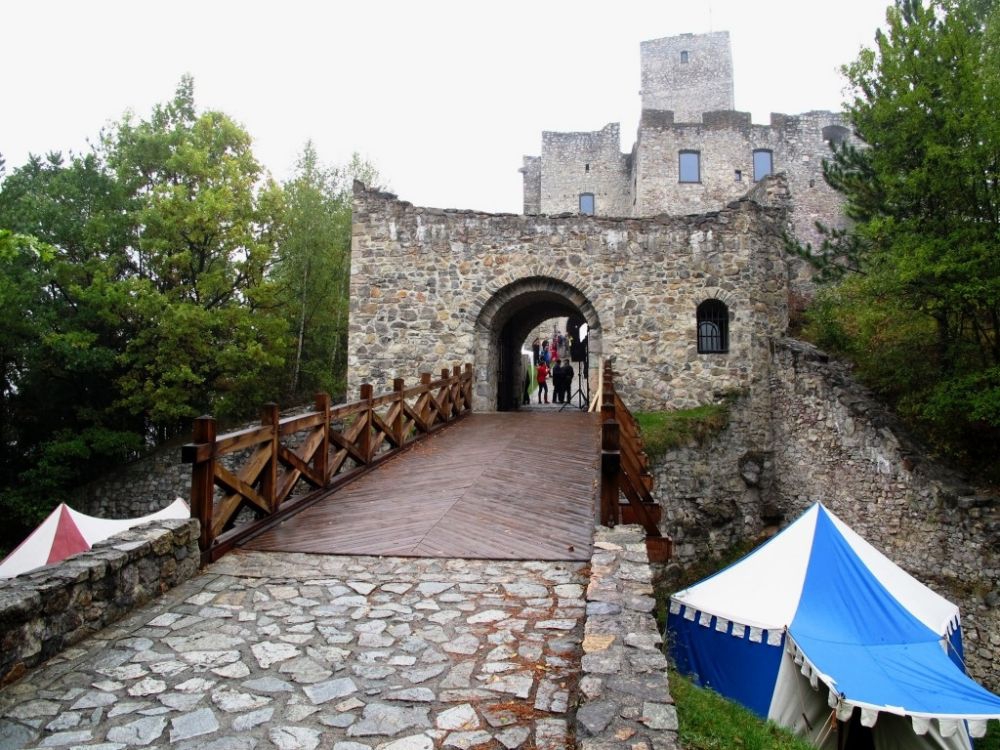 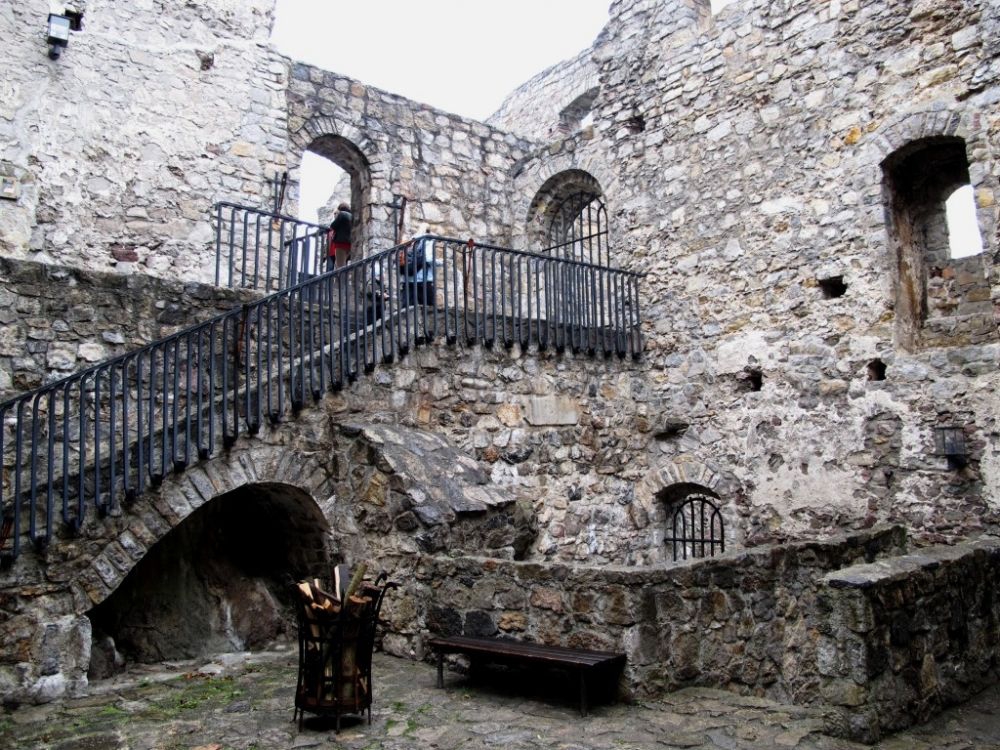 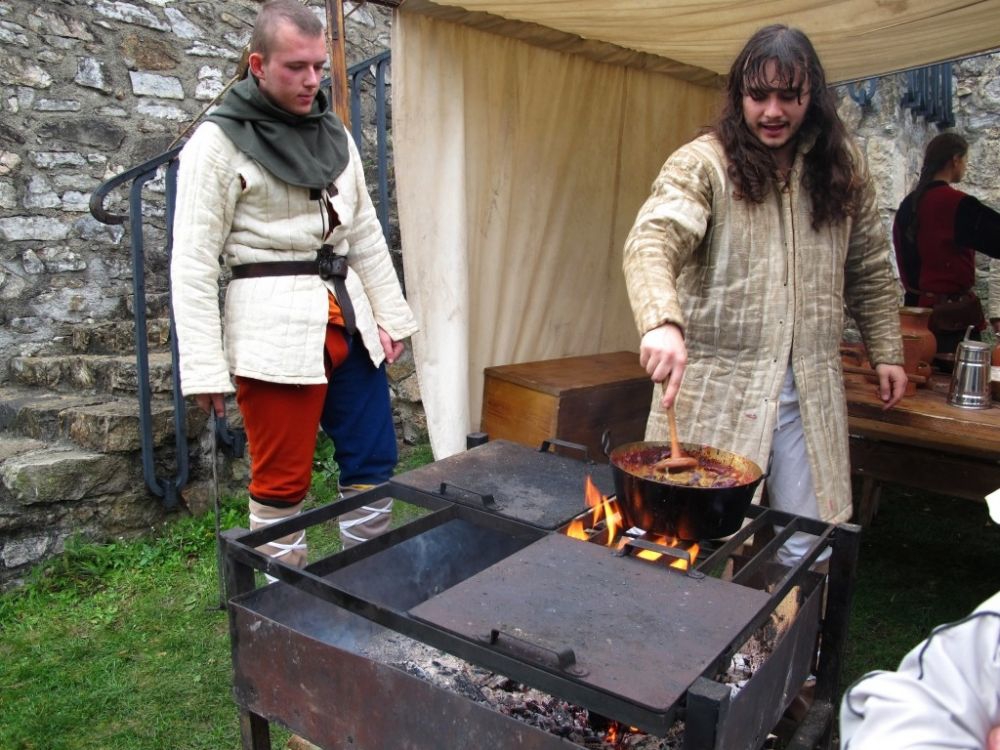 After viewing the booths and tasting it is time to look to the castle itself. And it's worth while. A view from the mountain to the valley a hundred meters below, where the longest Slovak river Váh wanders, is like the view from the eagle's nest. We can meet here besides lot of tourists and history lovers also fresh honeymooners in wedding dress, who say yes in the castle chapel in presence of the Templar background.

And then the actual show of clothing, equipment and outfit of Templars is coming. In the rhythm of the drums, upon flag of the order, twenty armoured fighters are coming. White robes with red crosses, beneath it the mail armour on the rich underclothes avoiding the body bruises and overheating. Clothing with a helmet weighing about 25-30 kg (55-66 lb), to be even added with outfit: spear, sword and mace.

When this knight had yet to mount a horse armour protected, there is nothing to envy him and the horse separately. Knights perform us various formations of fighting defensive positions and formations, convincingly dangerously they treat with heavy weapons, fall to the ground or are winning, leave themselves to be treated by sutlers, or leave to be taken away from the battlefield to the final journey. 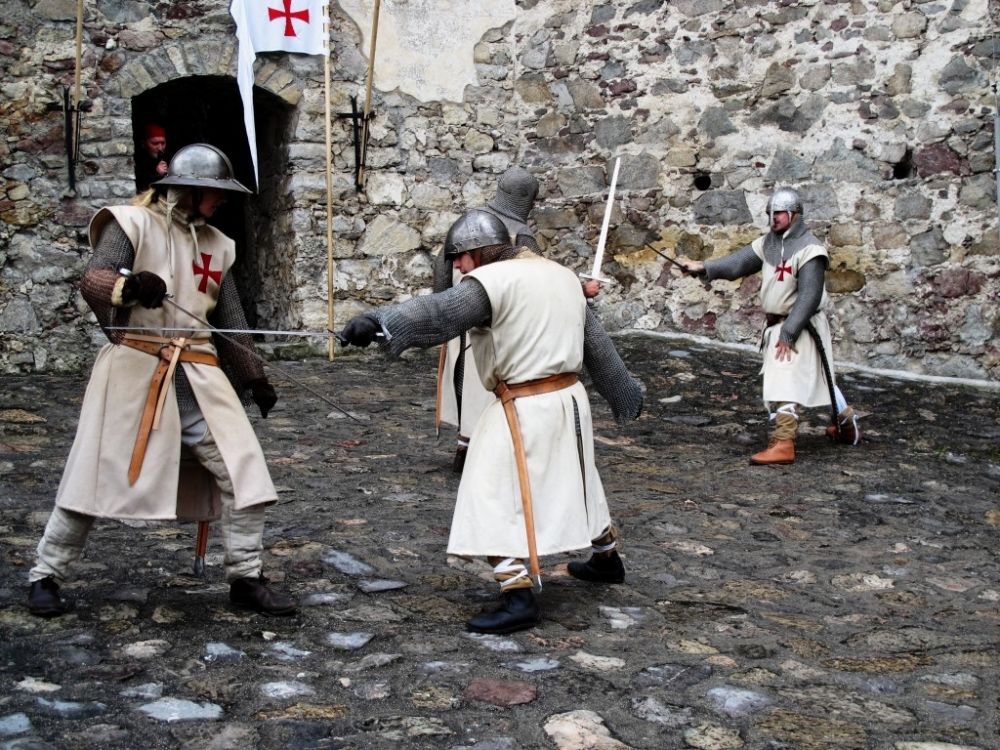 They also play us the scenes from receiving ritual, assault of their master by brigands, or tackle of a poor, starving thief of a bread, who is reprieved by them. The contemporary musical and vocal grouping Arcus enrich the scenes by Latin songs and all the events are initiated, commented and explained to the viewers by unobtrusive way by medieval 'moderator'.

The two-hour program flees so quickly, that you will not notice the movement of time or common human needs like hunger, thirst and fatigue from standing. And that says it all much more as any other well-intentioned praise. 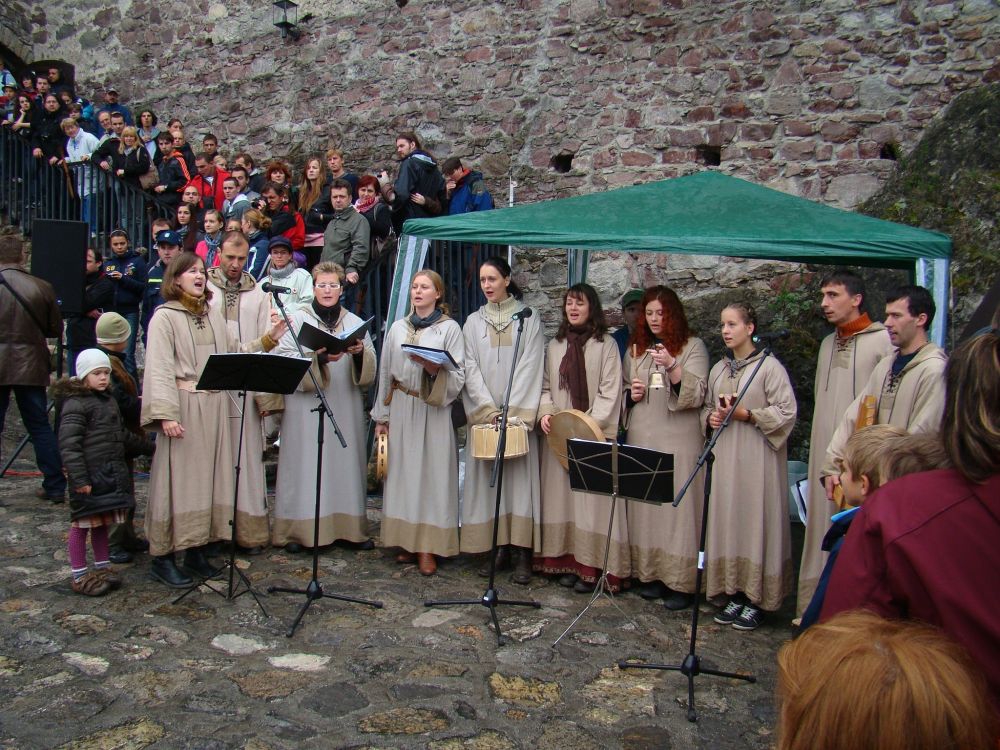