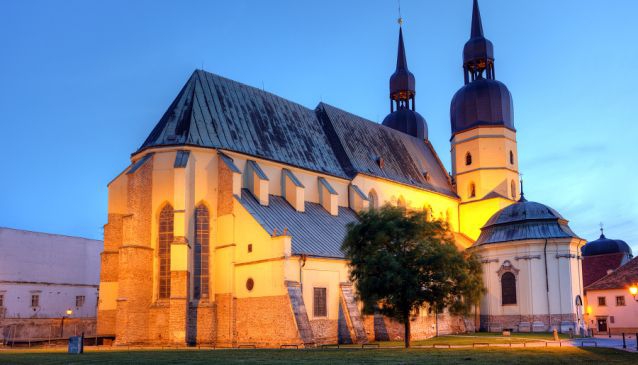 The basilica stands on the site of the oldest settlement and it was a cathedral church of the Esztergom Archbishop in the years 1543-1820.

The Basilica Minor of St. Nicholas is a three-nave basilica built in the Late Gothic or more particularly the Danube style. The presbytery of this 60 m (65.62 yd) long and 31 m (33.9 yd) wide building with 18 m (59 ft) tall main nave is oriented to the east.

The church lost its original Gothic character in 1618-1630 when cardinal Peter Pázmány ordered its widening and overall reconstruction in the Baroque style. It was also when several new altars were added in the church and its silhouette changed.

An octagon chapel was added to the northern side of the church in the years 1739-1741, which now contains the painting of the Blessing Virgin Mary known as the Merciful Virgin Mary of Trnava.

The Basilica Minor of St. Nicholas is not only the parish church but also the centre of cultural and religions activity of the town. It is famous for the international festival of organ music called 'Trnavské organové dni', held here every year at the end of August.