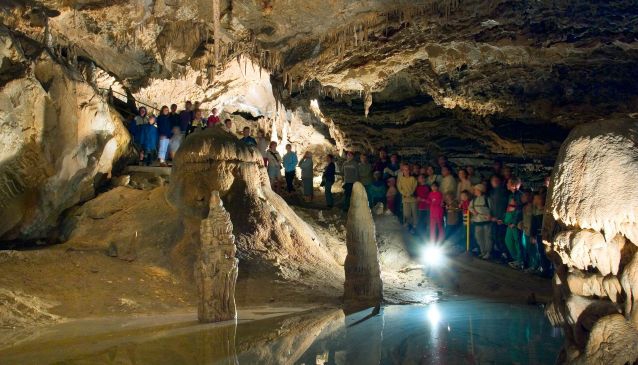 The Belianska Cave belongs among the most visited show caves in Slovakia. Except for bizarre rocky shapes, it is known by rich occurrence of calcite fills.

Formed in Mesozoic Middle Triassic dark grey Gutenstein limestones of the Krížna Nappe. The origin of the cave was conditioned by interbed surfaces, less the tectonic faults, along which the waters penetrated and flowed into deeper parts of the underground. The primary caverns were entirely filled with water, which except for corrosion worked by slow pressure flow. Large cupolas and smaller kettle hollows were modeled on the ceilings.

The primary caverns probably originated in connection with dissection of originally larger plateau of the Kobylí vrch above the cave, as well as with subsequent deepening of the Belá Valley. The largest underground spaces were formed already before the main Quaternary glaciation of the Tatras. The waters penetrating into the cave at the time of ice ages retreats had only partially remodeled the before formed underground spaces. The seepage waters are presently concentrated in the lowest parts of the cave, where they form occasional streams.

The cave length is 3,829 m (4,187 yd) with elevation range of 168 m (184 yd). The entrance parts, accessible through pierced tunnel, contain chimney spaces opening into them and leading from the upper original entrance situated 82 m (90 yd) above the present one. Ascending and descending parts of the show path, determined by interbed surfaces of limestone, are rising from the Crossroads and are in places widened by collapses into domes and halls (Collapsed Dome, Dome of Ruins). Oval shapes of water modelling are preserved in several places (Pipe Dome, Long Corridor, Abyss Corridor). Remarkable vertical segmentation is supplemented by abysses (Famine Abyss, Hell) and chimneys.

Seven bat species were determined in the cave. Dominating is the Greater mouse-eared bat (Myotis myotis). Occurrence of other species such as Whiskered bat (Myotis mystacinus), Brandt's bat (Myotis brandtii), Geoffroy’s bat (Myotis emarginatus) is less frequent. Tiny invertebrates such as Bathynella natans can also be found in cave pools.