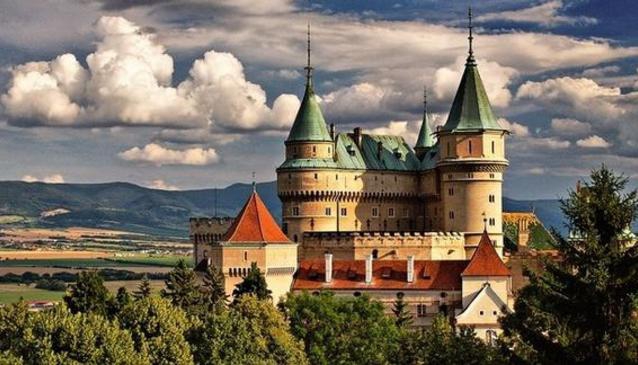 The real gem of Slovakia is the marvelous, fairy-tale Bojnice Castle, one of the most beautiful as well as most visited castles not only in Slovakia but also in Europe.

The castle in Bojnice is the unique architectural building stylized in Romantic style of the 19th century. But archive documents about the fort were dated from the beginning of the 12th century.

The basic forms of the castle are Gotic, the biggest renovating works were performed in the 16th century by the Thurzo family. The beginning of the radical rebuilding was realized in 1889 by the Pálffy family, mainly by Ján Pálffy, who has led it rebuilt to the present form. Then an architect Jozef Hubert used the patterns and the elements of French Romanticism. In this style there are furnished palatial interiors with rich historic furniture, historic weapons and artistic collections.

Today there is a museum with the exposition of original interiors and the picture gallery. The famous is so-called 'Bojnický oltár' (Bojnice Altar), the cycle of Gothic table paintings of an Italian artist. The castle area is attractive thanks to its spacious park with historically famous linden tree of the King Matthias I, the cave under the castle rock, well-known spa, as well as the ZOO.

International Festival of Ghosts and Spooks in held here regularly by the end of April and beginning of May. It is when the Bojnice Castle becomes the meeting point of ghosts, spooks, witches, and vampires from all over the world.

Another attraction is the performance of the local group of historical fencing Bojník and that of Aquila, the association of falconers.