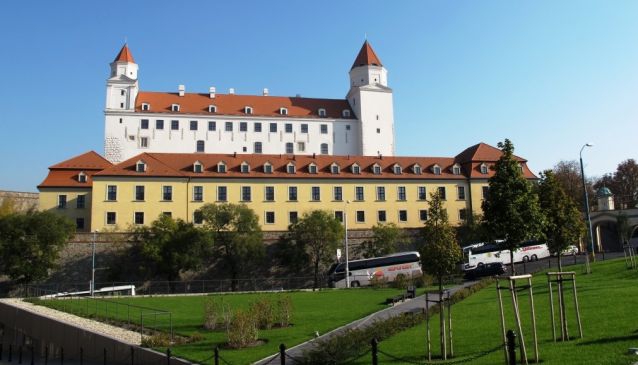 The monumental building of the Bratislava Castle is visible from a great distance. Certainly, every visitor of Bratislava notices the pronounced silhouette.

The castle, on a hill above the old town, dominates the city of Bratislava. It features in the first written reference to the city, which appears in the Annals of Salzburg of 907, in association with a battle between Bavarians and Hungarians. The castle hill was populated as early as the late Stone Age, its first known inhabitants were the Celts who founded a fortified settlement here called 'Oppidum'.

For four centuries, the border of the Roman Empire, the 'Limes Romanus', ran through the area. During the Great Moravian Empire, Slavs built a fortress that became a significant center for the time. In the 10th century Bratislava became an integral part of the growing Hungarian state, a stone palace and the church of St. Savior and its chapter were built on the castle hill in the 11th century.

In the 16th century, King Ferdinand I ordered the rebuilding of the castle in the Renaissance style, while in the 17th century, when the castle became the seat of hereditary provincial chief, Pálffy, it was rebuilt in the baroque style. In the reign of Empress Maria Theresa, the castle was arranged according to the needs of her son-in-law Albert, governor of Saxony and Tessen, who was a fervent art collector and who installed his works in the castle. This collection was later moved to Vienna to become the present-day Albertina Gallery.

Since independence, the castle has served as a representative venue for the Slovak Parliament and houses collections of the Slovak National Museum. In 2008, a comprehensive restoration project was launched which is expected to take five years. As a result, the interior is currently closed to visitors but the exterior fortifications and their views over the river Danube can still be accessed.