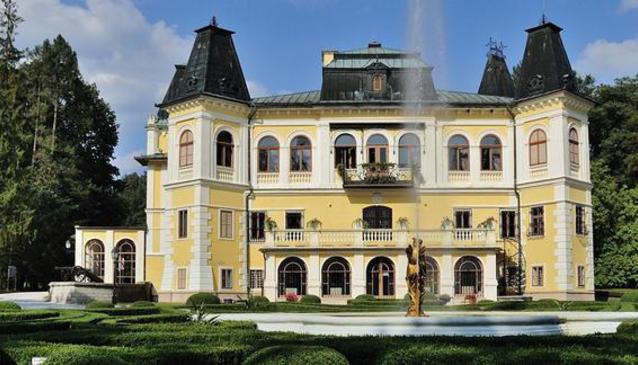 Northwest of Rož&#328ava in the eastern part of Slovakia, in the valley of the river Slaná the wonderful and fairy tale-like 2-story Chateau Betliar with four corner towers can be found.

It is a stately hunting manor surrounded by a wonderful English park with romantic structures including an artificial cave and waterfall.

Its interior is equally interesting, as it contains a picture gallery, music and hunting halls, a library, antique furniture and exotic collections. Its reconstruction won a EUROPA NOSTRA award.

The magnificent chateau, history of which is associated with the noble family of Andrássy, was built in the valley of the brook Betliarsky potok below the thickly wooded slopes of the mountains Volovské vrchy on the site of the original Bebek castle from the 15th century. A part of the walls of this castle was used upon the alteration of the Gothic mansion into the Renaissance-Baroque 3-storey chateau in the 17th -18th century. The appearance of the chateau from the 19th century has been preserved, with minor modifications, to the present day.

One of the most remarkable things about the chateau is its main library. Leopold Andrássy established it in 1790 and the furniture and interior of the library are from the same period. More than 14 thousand volumes of mainly theological, historical, geographical and philosophical literature from the 15th to 19th century written in 6 different languages have been preserved in the library.

Until 1945, the chateau was used by the Betliar branch of the Andrássy family. It was nationalized after the World War II, however, its original furnishing was preserved and the chateau became a museum with the exposition Housing Culture of the Nobility in the 18th and 19th century.

The chateau is surrounded by a beautiful English park. The park with the area of 57 ha (141 ac) is one of the largest maintained parks in Slovakia and has been included in the list of the world historical gardens.