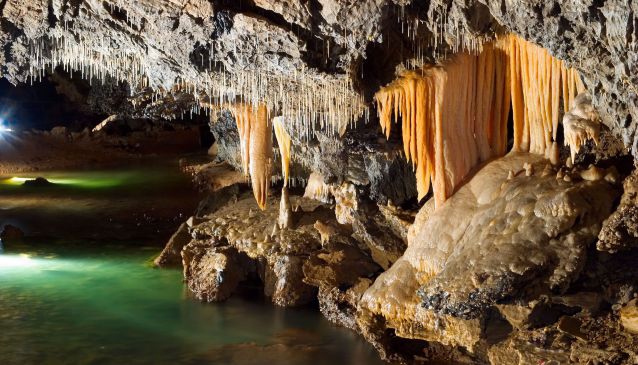 Directions to Demänovská Cave of Liberty

The Demänovská Cave of Liberty is the longest cave system in Slovakia and belongs among its dominating caves. It is the most visited show cave in Slovakia.

The cave represents morphologically the most varied part of the Demänovský Cave System. It is formed in the Middle Triassic dark-gray Gutenstein limestones of the Krížna Nappe along the tectonic faults by the ancient submersible flow of Demänovka and its side hanging submersible tributaries. The length is 8,126 m (8,887 yd) with elevation distance of 120 m (394 ft).

The underground water course of Demänovka, which springs in the non-karst territory under the main ridge of the Low Tatras, flows through the cave. It sinks underground in Lúcky and springs again through the Vyvieranie Cave northerly from the Demänovská Cave of Liberty. The Great Lake is 52 m (57 yd) long, 5 to 12 m (5.5 to 13 yd) wide and more than 7 m (22 ft) deep. Air temperature is from 6,1 to 7,0 °C (43 to 44.6 ºF), relative humidity 94-99%.

The bones of cave bear (Ursus spelaeus) were found in the Bear’s Passage (Medvedia chodba). The finding of the palpigrade Eukoenenia spelaea means one of the most northern occurrences of this arachnids in the world, which ranks the cave among the biospeleological localities of European importance. From among the tiny invertebrates, mostly the multipede Allorhiscosoma sphinx (endemite of the middle Slovakian caves) and amphipods Synurella intermedia a Niphargus tatrensis are important.