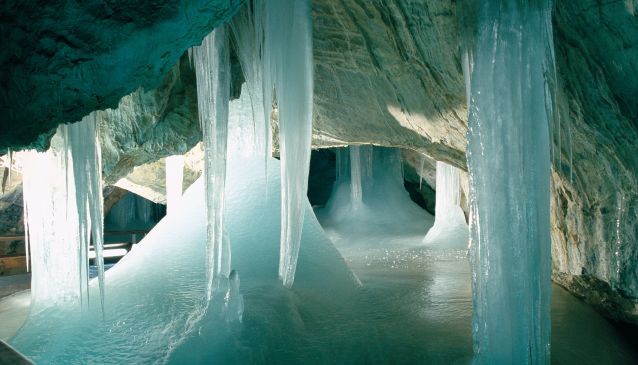 The Demänovská Ice Cave presents the northern part of world known Demänovské Caves. It stands out by occurrence of permanent ice fill, bizarre and mighty shapes of underground spaces.

The Demänovská Ice Cave was formed in Middle Triassic dark-grey Guttenstein limestones of the Krížna Nappe, along tectonic faults by the previous submersible flow of the river Demänovka, which flowed from the Demänovská Cave of Peace. It presents the northern previously spring part of the Demänovský cave system. Some upper parts of the cave are formed by waters of side submersible branch of the river Demänovka, which penetrated from the adjacent Dvere Cave and from the New Cave in Bašta.

The length of measured spaces is 1,975 m (2,160 yd) with vertical distance of 57 m (62 yd). The cave spaces of three developmental levels consist of oval, river modeled passages with ceiling and side channels (Black Gallery, Lake Pasage, Bear’s Passage) and domes reshaped by collapses and frost weathering (Gravel Dome, Great Dome, Kmet’s Dome, Bel’s Dome, Halaš’ Dome, Dome of Ruins). The passages descend from the entrance to the depth of 40 to 50 m (131 to 164 ft).

Ice fill occurs in the lower parts of the cave, mainly in the Kmet’s Dome. There is floor ice, ice columns, stalactites and stalagmites. The conditions for glaciation started after burying several openings to the surface in consequence of slope modeling processes, by which the air replacement was restricted. Heavier cold air is kept in the lower parts of the cave. Seeping precipitation water freezes in overcooled underground spaces. Air temperature in glaciated parts fluctuates around 0 °C (32 ºF) and in direction to the back non-glaciated parts rises from 1.3 up to 5.7 °C (34.3 up to 42.2 ºF). Relative air humidity is between 92 and 98%.

Original flow stone fill was preserved in several places of the cave (stalactites, stalagmites, sinter covers on the walls, floor crusts and other forms), which is, however, considerably destroyed by frost weathering in the glaciated part of the cave. Sinter formations are colored on the surface into gray up to black from soot of tar torches, oil burners and paraffin lamps, which were used for lighting until 1924. This phenomenon, in the case of the Demänovská Ice Cave, can be considered more or less a cultural one, connected with its rich history.

The cave belongs among long known finding places of bones of various vertebrates including the cave bear (Ursus spelaeus), which were in the first half of the 18th century considered dragons’ bones. That’s why the cave was called Dragon’s Cave in the past. By now, eight bat species were found in its underground spaces. It represents the most important wintering place of the Northern Bat (Eptesicus nilssonii) and the second most important one of the Whiskered/Brandt’s Bat (Myotis mystacinus/Myotis brandtii) in Slovakia. Species representation of tiny cave fauna – invertebrates is substantially smaller in glaciated parts as compared with non-glaciated ones.