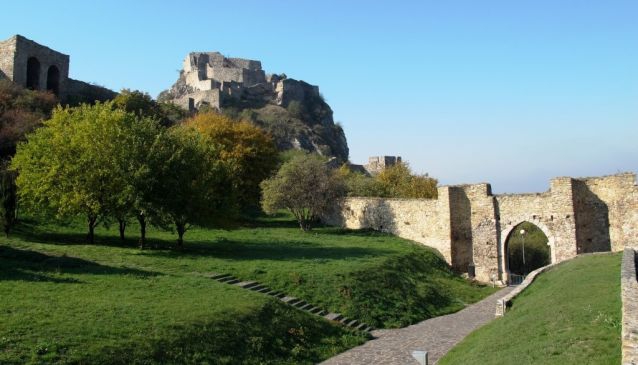 This strategically important site has been populated by several nations, from the Celts, Romans, Goths, Lombards and many more. The oldest traces of Slavs are from the 8th century. In the 9th century an exceptionally important Great Moravian fortress stood here, connected with the name of prince Rastislav. The first written mention of Devín is from the year 1223. From the 15th century the castle belonged to renowned aristocratic families. In 1809 it was blown up by the Napoleonic armies. In the 19th century it became an important site for the awakening movement of the Slovak National Revival.

The influential Devín Castle, as a part of the oldest history of Slovakia, is standing on a massive rock hill above the confluence of the rivers Danube and Morava and is an unusually impressive landmark.

Its ground plan is very irregular. Today we enter the castle through the western Moravian Gate. The southern gate protected by a pair of semicircular bastions was built in the 15th century on an older Great Moravian rampart.

Close behind the gate and on the right side of the path is a precious archaeological monument from the Roman period of Devín's history. The ground plan of the remains of a bulky stone building from the 4th century suggests a Classical tomb.

The path divides into two on the ridge of the castle hill. The left branch leads to the place where a Great Moravian church stood in the 9th century. The first branch of the path leads to the conserved ruins of the middle and upper parts of the medieval castle. In the first half of the 15th century the Gothic Garay palace with two stories was built and the Renaissance palace and fortifications were added in the 16th century.

Some vaulted spaces of this palace are today used for exhibitions of the Bratislava City Museum. The 55 m (180 ft) deep castle well is on the courtyard of the middle castle. Near the well is also a terrace with view of the abandoned amphitheatre, the Danube and the mountain Braunsberg in Austria.

In the wonderful setting above the bicolour confluence of the Danube and Morava, an elegant tower with battlements stands out. It is the Virgin tower. A bridge over a moat and stairs lead to the top platform with remnants of a guard tower from the 13th century rebuilt in the 15th century with panoramic view of the surroundings.

Today a renaissance fortress with a battlement stands on the narrow cliff. Legend has it that a bride jumped from there on her wedding day, when her family killed her prospective knight Mikuláš and wanted to send her to a convent.

Performances of historic fencing are organised during tourist season. Visitors can also try throwing the javelin or axe or shooting of bow. Boats leave for Bratislava or Hainburg in Austria from a small port situated below the castle. A short boat trip up the river Morava is also possible.

Devín is an excellent location for walks and cycling, not only to the monuments located within the entire complex, but also in the superb surrounding countryside.

Upper Castle is temporarily closed to the public due to its reconstruction.

Entry into the castle area only under appropriate weather conditions.