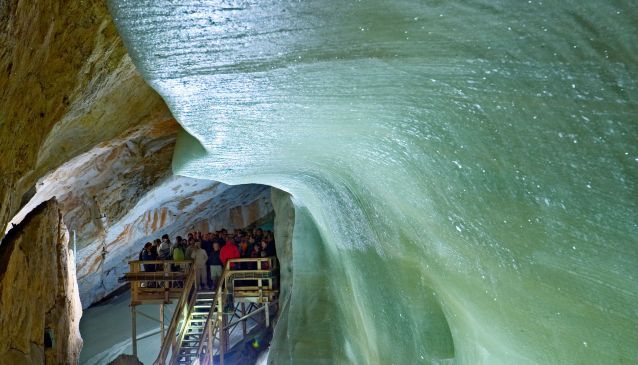 Dobšinská Ice Cave belongs among the most important ice caves in the world. Since 2000 it is inscribed on the UNESCO's World Heritage List.

Dobšinská Ice Cave is a part of the Stratená Cave System. It is formed in the Middle Triassic pale Steinalm and Wetterstein limestones of the Stratená Nappe, along the tectonic faults and interbed surfaces. The cave reaches the length of 1,483 m (1,622 yd) and vertical span of 112 m (367 ft).

The main part of the cave is represented by a giant cavity descending from the entrance to the depth of 70 m (76.6 yd), which was formed by breakdown of rock columns between the passages formed by submersion palaeoflow of Hnilec in several development levels. At present, the most of its volume is filled with glacier, sometimes up to the ceiling, by which it is divided into individual parts (Great and Small Hall, Ruffiny’s Corridor and Ground Floor). Collapsed Dome (Zrútený dóm) is partly glaciated, and its edge reaches as far as under the Duca breakdown. Original oval shapes of river modelling are almost entirely destructed by collapses and frost weathering.

Conditions for glaciation arose probably in the middle Quaternary period after the breakdown of ceilings between the Dobšinská Ice Cave and Stratenská Cave, by which the cave obtained sack-like character with stagnation of cold air that penetrated into the cave through the upper opening formed by collapse of the ceiling part (present entrance to cave). Freezing the percolating rainfall waters caused glaciation of the underground space. The beginnings of ice formation go back to the Riss ice age (approx. 300- to 140-thousand years ago), or until the end of the Mindel ice age.

Ice fill occurs in the form of floor ice, ice falls, ice stalagmites and columns. Glaciated surface has 9,772 m2 (11,687 yd2), ice volume reaches 110,100 m3 (3.9 mil ft3). The highest thickness of ice is in the Great Hall with 26.5 m (29 yd). The floor ice is characterized by its stratification. The decrease of ice takes place by melting on the contact with the bedrock. Continuous replacement of the underground glacier supposedly takes around 1,700 up to 2,000 years. The ice is slowly moving from the entrance, Small and Great Hall towards the Ground Floor and Ruffiny’s Corridor (2 to 4 cm/0.8 to 1.6 in a year). The Dobšinská Ice Cave belongs among the most significant ice caves in the world, which is accentuated by its location outside the Alps high-mountain region (underground ice is at elevation of 920 to 950 m/3,018 to 3,116 ft above see level).

The cave stands for the most important wintering place of the Whiskered Bat (Myotis mystacinus) and Brandt’s Bat (Myotis brandtii) in the central Europe. From among 12 species that were found in the cave important is the occurrence of the Pond Bat (Myotis dasycneme) and Natterer’s Bat (Myotis nattereri), which belong among the rarest bat species in Slovakia.