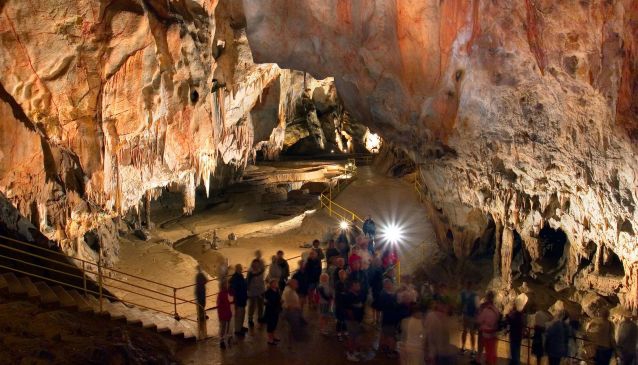 Domica Cave is the most known and longest cave of the Slovak Karst National Park. It is interesting by precious archaeological findings, occurrence of flow stone shields and drums.

The cave is formed in the Middle Triassic pale Wetterstein lime stones of the Silica Nappe along the tectonic faults by corrosive and erosive activities of Styx and Domický Brook and smaller underground tributaries draining waters mainly from the non-karst part of the basin. Horizontal oval passages with ceiling troughs dominate the cave. The passage are in places widened into domes and halls. The passage of Styx gains a character of underground canyon with meanders. Three development levels are situated in a relative lowering of 8 to 12 m (26 to 39 ft). The lowest level is filled up with gravels and loam.

Domica Cave is connected with the Certova diera Cave and together they reach the length of 5,358 m (5,860 yd). They also form one genetic unit with the Baradla Cave in Hungary with the total length of about 25 km (15.6 mi), from which almost one quarter is in the Slovak territory.

The cave is rich in sinter fills, from which the most typical are shields and drums, cascade pools (Roman Spa – Rímske kúpele, Plitvice Lakes – Plitvické jazierka), onion-like stalactites and pagoda-like stalagmites. Also other sinter forms occur in the cave. Air temperature ranges from 10.2 to 11.4°C (50.4 to 52.5 ºF) and relative humidity from 95 to 98%.

The bones of cave bear (Ursus spelaeus) were dug out from sediments in the Dry Passage. Sixteen bat species were found in the Domica Cave and Certova diera Cave by now. The dominating one is the Mediterranean Horseshoe Bat (Rhinolophus euryale), which forms here some 1,200 - 1,400 members’ colony, the only one of such a kind in Slovakia. Thick layers of bat excrements – guano can be found in some places. Its chemical reaction with sinter created guano pots. Forty-four species of collembolans (with the most important endemite Arrhopalites slovacicus) were found in this cave together with rare palpigrade Eukoenenia spelaea, multipede of genus Typhloiulus sp., crustacean Niphargus tatrensis and many other species of terrestric and water fauna.