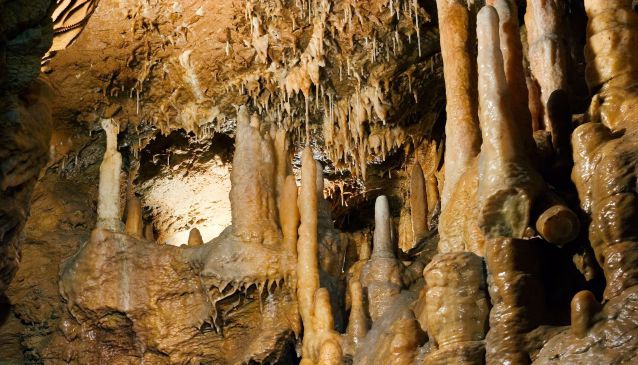 The Driny Cave is the only show cave in the western Slovakia and one of the main tourist attractions of the Lesser Carpathians.

It is formed in brown-grey Lower Cretaceous chert lime stones of the Vysocký Nappe by corrosion of atmospheric waters penetrating along tectonic faults. The cave reaches the length of 680 m (744 yd) and vertical span of 40 m (131 ft). It consists of narrow fissure passages, from one to three meters wide (Collaborators’ Passage, Benovský‘s Passage, Passage of Hopes) and not big hall spaces (Slovak Speleological Society Hall), formed mostly on intersection of tectonic faults. The discovery chimney, which descends to 36 m’s (118 ft) depth from the upper opening to the intersection of the Entrance Passage (Vstupná chodba) with the Collaborators’ Passage, has a character of sinkhole chimney.

Air temperature in the rear parts of the Driny Cave ranges between 7.1 and 7.8 °C (44.8 and 46 ºF), relative humidity between 92 and 97%. Influences of outside climate show themselves under the Discovery Chimney, which communicates with the surface, and in the Entrance Passage. Air temperature in these spaces reaches from 5.6 to 8.7 °C (42 to 47.7 ºF).

Eleven bat species have been found here by now. The most abundant is the Lesser Horseshoe Bat (Rhinolophus hipposideros). From among other species the following ones can be found here: Greater Horseshoe Bat (Rhinolophus ferrumequinum), Greater Mouse-Eared Bat (Myotis myotis), Barbastelle (Barbastella barbastellus), Common Long-Eared Bat (Plecotus aurituss), and others.