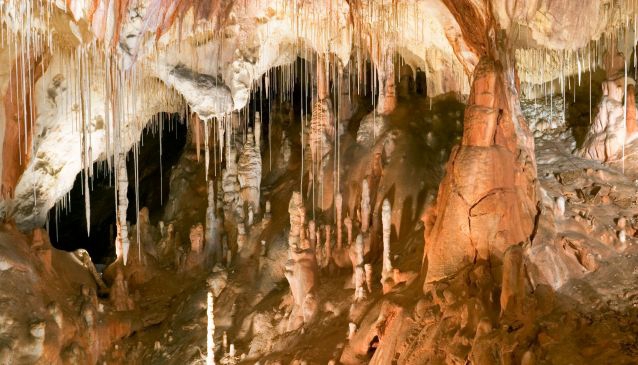 Gombasecká Cave belongs among the most important caves of the Slovak Karst national park. It is known mostly by occurrence of thin straw stalactites.

It is formed in the Middle Triassic pale Wetterstein lime stones, dark-grey Gutenstein lime stones, pale lime stones and dolomitic lime stones along the tectonic faults, by corrosive and erosive activities of the Black Brook and its intermittent tributary from the well in the Marble Hall. The Gombasecká Cave and Silická Ice Cave are a part of the Silica-Gombasek underground hydrological system. Both the caves are separated by so far unknown section of the Black Brook. It springs to the surface through the Black Resurgence, 11 m above the bottomland of the river Slaná.

The Gombasecká Cave represents a fluviokarst outlet cave, which is 1,525 m (1,668 yd) long. The two floors consist of oval, river modeled as well as fissure passages, which are in places widened by collapses into domes and halls. The upper floor is situated 5 to 10 m (16 to 32 ft) above the active riverbed of the Black Brook, which flows in the lower parts of the cave. The Dry Passage, located on the upper floor, was formed by waters of unknown origin, which intermittently rise through the 10 m (32 ft) deep well in the Marble Hall also at present.

The cave is unique by thin straw stalactites, which can reach as much as 3 meters’ (3.3 yd) length. Also other forms of stalactites, stalagmites, sinter curtains, coatings and crusts can be found here. Air temperature in the cave ranges between 9.0 and 9.4 ºC (48.2 and 48.9 ºF), and relative humidity between 95 and 97%.

Remarkable is the finding of a blind multipede of Typhloiulus sp. genus with 26 mm (1 in) body length, which represents the biggest troglobite – genuine cave animal ever found in the Slovakian caves. From among the bats, which occur in the cave only occasionally, we can observe the Smaller Horseshoe Bat sometimes in spring or autumn season. Fire salamanders (Salamandra salamandra) use to dwell in the entrance passage from autumn to spring in the recent years.