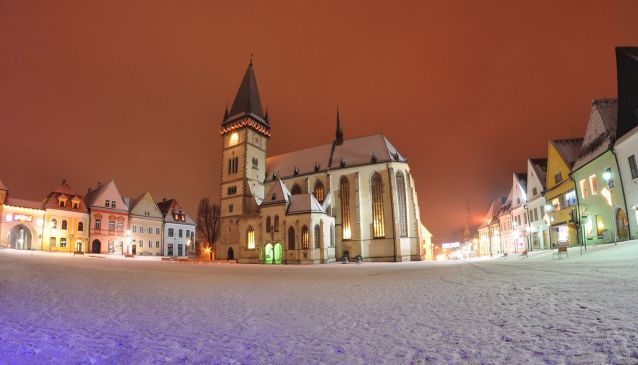 Directions to Historic Town of Bardejov

Bardejov is an exceptionally complete and well-preserved example of a fortified medieval town, which typifies the urbanisation in this region.

The town of Bardejov with a population of 33,400, situated in the eastern part of Slovakia, was rightly awarded the European award, gold medal of ICOMOS Foundation of UNESCO in 1986, and it was inscribed on the UNESCO World Heritage List in 2000.

Attractiveness of Bardejov is enhanced by the pleasant landscape with numerous landmarks. In the calm valley of the Bardejovský potok brook on the south-eastern foothill of the Flysch mountain of Busov the spa of Bardejov is located. The town administers it. Múzeum ľudovej architektúry (Museum of Popular Architecture) situated in the upper part of the spa, where 28 folk buildings from the upper part of the Šariš and the north of Zemplín region have been gathered.

The town was referred to in the Ipatievsky annals in 1241 as the market settlement of Bardouev. Another, six year younger document, mentions that in the territory of Bardpha was a Cistercian monastery. The arrival of German colonists after the Tartar invasion gave impetus to the development of a prospering and flourishing medieval town. Royal privileges and above all the decision of Louis I of 1376 to promote Bardejov to free royal borough accelerated its further development.

Bardejov lived its best times in the 15th century. The driving force of its prosperity was trade and crafts, which classified it among the most important towns of the Kingdom of Hungary. The town opened itself to the modern ideas in the field of culture and education in the 16th century. They were brought to the town primarily from Germany by representatives of the Renaissance and Reformation humanism.

The buildings in the historic centre are included in the Town Monument Reserve.

Bardejov is spoken of as the 'most Gothic of towns in Slovakia'. Its centre consists of a set of historical buildings arranged in the area limited by an almost continuous belt of town fortifications. The principal area of the historical core is the rectangular Radničné námestie square skirted by rows of antique burgher houses with typical gable facades.

The centre of the square is dominated by a former Town Hall building that was built at the outset of the 16th century (1505-1509). The historic Town Hall building houses an exposition of the Šariš Museum (Šarišské múzeum) called 'Bardejov – the Free Royal Town'. Another exposition of this Museum presenting icon from the northeastern Slovakia is exhibited in house No. 27 in the square. The museum exposition focusing on natural sciences can be found in house No. 3-5 in adjacent Rhódyho ulica street.

The most significant monument of the square is the Roman-Catholic Basilica of St. Egidius that is located in its northern section. Its construction started at the beginning of the 15th century. It was conceived as a majestic Gothic basilica with three isles. There is an interesting set of 11 Late Gothic altars from the 15th and the 16th centuries and some of those wood carvings are considered to be supreme works of European art.

The top of the New Gothic church tower offers a unique view of Bardejov from the bird's eye view.

The Franciscan monastery with the church is another of the town jewels. The monastery stands near the town walls, the best preserved medieval fortification system in Slovakia. Besides the stone town walls one gate and ten bastions have been preserved.