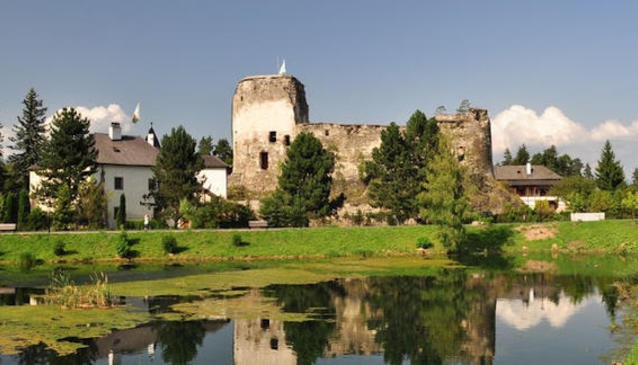 The Hrádok Castle, built on a small hill near the river Belá, is situated in the town of Liptovský Hrádok in the north of Slovakia.

Though several versions of a story narrating the origin of the castle exist, one thing is certain, the first reference to the castle is from 1341.

Donc, head of the Zvolen County built the castle at the beginning of the 14th century. It was one of the military buildings guarding an important trade route along the river Váh. One of the legends testifies that the castle was connected by underground passages to the fortifications near Liptovský Ján and even the Liptov Castle.

Later it became the seat of administration of the castle estate owned by the kings of Hungary until the mid-15th century. The posterior owners (among them the noble families of Zápolský, Thurzo, Ballas and others) received it as a gift. The castle was heavily damaged during the Rebellions of the Estates at the turn of the 17th and 18th century. It is now under reconstruction.

The Renaissance manor was added to the castle structure in the 17th century.

After a recent splendid reconstruction it offers a stylish accommodation, food and unconventional conference rooms.

Castle and Manor house have been open for public since August 2010. You can take a part in a guided castle tour around the courtyard, the ruin castle as well as inside the manor house. The tour finishes in the biggest and unique hall called the Stone Gallery with an audiovisual presentation of the Grand Castles history, reconstruction and of the currently refurbished chambers.

In case of groups (10 persons or more) it is possible to book individual castle tour time slots.