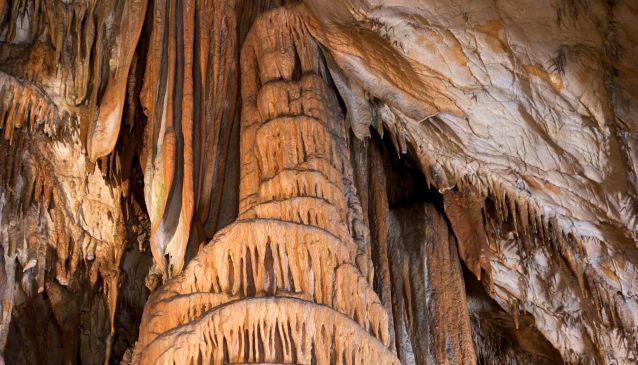 The Jasovská Cave belongs among the most important caves of the Slovak Karst National Park. It is known by occurrence of rich calcite flow stone fill and remarkable rocky shapes.

The Jasovská Cave is formed in Middle Triassic grey Gutenstein dolomites and pale Steinalm lime stones and dolomites of the Silica Nappe. The massif of the Jasov Rock is markedly disrupted by faults and numerous fissures, which condition the prevailing direction of passages and to great extent also the number of passages in the cave. The Jasovská Cave reaches the length of 2,811 m (3,074 yd) with vertical span of 55 m (180 ft).

The lowest parts of the cave including a part of the show path use to be flooded in consequence to water-table fluctuations. The lowest level of cave lake is 7 m (22 ft) below the surface flow of the river Bodva, which does not flow through the cave at present. An occasional flooding of the cave lower parts does not correlate with Bodva River's fluctuations.

Several parts of the cave are decorated with rich flow stone fill. Pagoda-like stalagmites, columns, flow stone waterfalls, shields, drums, straw stalactites and other forms are eye catching. Air temperature ranges between 8.8 and 9.4 ºC (47.8 and 48.9 ºF), and relative humidity between 90 and 98%.

Bones of cave bear (Ursus spelaeus) and cave hyena (Crocuta spelaea) were found in the cave as remains of ancient animals. Nowadays, the Jasovská Cave is a very important bat locality. By now, 18 bat species were found in the cave. They stay in the cave mainly in the winter season. The most abundant is the Greater Horseshoe Bat (Rhinolophus ferrumequinum) and Lesser Horseshoe Bat (Rhinolophus hipposideros). The cave is one of the most important wintering places of the Greater Horseshoe bats in Slovakia. A tiny palpigrade Eukoenenia spelaea represents the rare invertebrates.