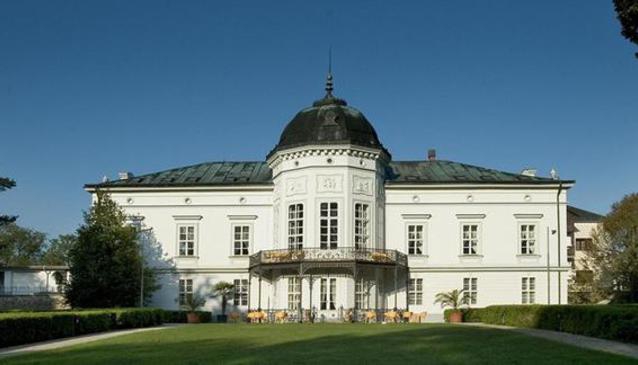 An extensive, quiet park in the village of Beladice - Pustý Chotár, which is located just a few kilometres away from Nitra, features a lovely Neoclassical manor house.

The manor house was built by the Jesenský family in approximately 1820. It was the residence of the noble family of Szirányi – Ötömös. The building was later purchased by Baron Henrik Lindelóf, who rebuilt and enlarged the manor house at the turn of the 19th and 20th in the Neoclassical style. The manor house got the shape of a two-storey three-wing building with a rectangular ground plan.

The manor house has preserved its Neoclassical look, although the building's dimensions are smaller today. In 1937, during reconstruction work initiated by the wealthy Jewish businessman Dr. Kraus, who owned the manor house at the time, side wings of the building were dismantled. Soon, the Durčanský family became the new owners of the manor house and it was in their possession until 1945.

The Genius Loci in the manor house is markedly present. As regards the interior furnishings, a faience hearth has been preserved in the form of a Pseudo-Renaissance sideboard from the 1890's. Painted window-panes of the main entrance are also worth noticing. Banisters of the Neo-Classical entrance staircase were made by J. Wagner, an artist locksmith from Vienna.

Since the end of 2003, the manor house has been part of a hotel with characteristics including the provision of high-quality services, special setting, conditions and atmosphere for work and relax of its visitors. It offers accommodation in comfortable rooms, while the hotel's restaurant, the stylish café with a summer terrace and the lobby bar serve a grand selection of meals, drinks, and specialties. Visitors can also relax in a new wellness centre, tennis courts and a beautiful five-hectare park. The park also features the Natural Gallery of Art Ceramics that was officially opened on 31 August 2007. The gallery is connected to the tradition of international ceramics workshops that were held here from 1999 and in seven years, the workshops were attended by almost 50 artists from 20 countries worldwide. It is unique with respect to the whole territory of Slovakia, as there is no other place featuring a similar permanent artistic exhibition of ceramic works in a historical building.