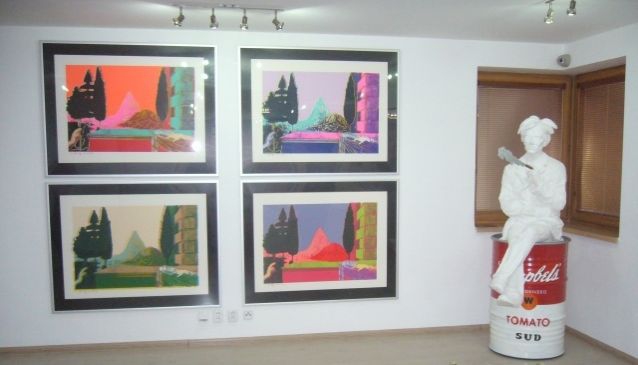 Historically first permanent exhibition of Andy Warhol's unique works was open on Monday, 1st February, 2010. This exhibition has been a join effort of art fans from 'The Mihal Gallery', established in the thematic 'Múza' hotel promoting art. The colors used in the hotel are also pop-art like.

One of the 25 pieces the gallery exhibits is Warhol's unique Marilyn Monroe. It is Warhol's manual unpublished piece. Its uniqueness also lies in the fact that it is different from his well-known pop-art icon images of this world-famous actress and it is put in an early 60's frame. Other portraits the visitors of this gallery can see are those of Wayne Gretzky (a Canadian ice-hockey legend), Hans Christian Andersen ('TP') - (a world-famous Danish fairy-tale writer), Martha Graham ('UT') – a modern dance founder and Teddy Roosevelt ('HC') – one of the most popular USA presidents ever, whose first name was given to the first plush bear in the world i.e. Teddy (Theodore) Bear in 1903.

Other pieces making this gallery's portfolios (sets of paintings) attractive and valuable are 'Hammer and Sickle' series and 'Annunciation' inspired by one of the paintings by Leonardo da Vinci, a renaissance painter. It is not generally known that Warhol worked on some Bible topics and met the Pope John Paul II. Another unique portfolio of this gallery is Saint Apollonia (two prints of this portfolio are 'TP'). Other prints exhibited in the Mihal Gallery worth mentioning are definitely: 'Kachina Dolls' from the 'Cowboys' portfolio and 'Indians' and 'Sitting Bull'. The gallery also exhibits a print that is special topic-wise. Andy Warhol made this piece for the 1984 Winter Olympic Games that took place in Sarajevo as commissioned by the International Olympic Committee. Its name is 'Speed Skater' ('TP').

Very 'refreshing' is look at the 'Space Fruit – Pears' piece. The print of the world-famous Neuschwanstein Castle ('HC') is the icing on the cake. This castle was built in honour of the legendary German knights. It is a combination of dreams and wealth of the Bavarian King Ludwig II and of an art fantasy produced by the composer Richard Wagner. The castle situated above wild straits of the Pollak River in the Bavarian Alps is probably the most amazing castle in the world. Walt Disney used the Neuschwanstein Castle as its Disneyland emblem.

The Mihal Gallery – the gallery established in the MÚZA hotel is a one-of-its-kind project trying to outline the life and work of Andy Warhol, a world-famous artist whose parents came from the East Slovak village Miková. To get to the collection, the visitor has to pass an unusual glass staircase tastefully decorated with 'visuals' of Warhol's masterpieces. Another thing that makes this gallery so special is the 'presence' of Andy Warhol himself, i.e. his life-size statue presenting the artist sitting on a huge Campbell's soup can in a relaxed pose. Visitors are also welcomed by an Andy's portrait placed in the gallery exterior. Those who are interested in detailed reference to Andy Warhol's life and work can have a look in the catalogues. Moreover, there are audiovisual projects running on a large screen directly in the gallery.