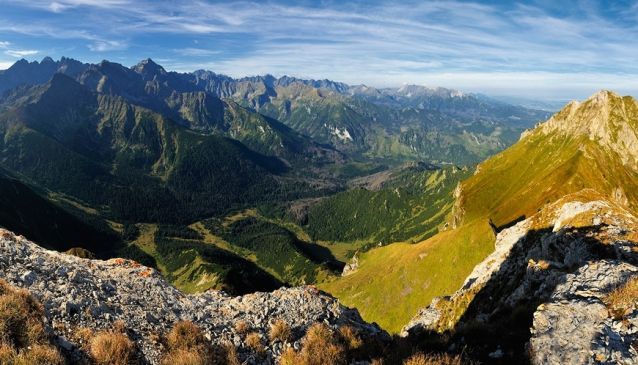 National Park of Tatry (TANAP) is the highest muontains of the Carpathian arch. It was founded on 18th December 1948 as the first national park in former Czechoslovakia.

It has a big diversity of the natural phenomenons. There are many rocky hills, deep valleys, steep hillsides, seas of rocks, transparent lakes and unique animal kingdom and flora. Territory of TANAP is consisted of High Tatras, West Tatras and Belianske Tatras. Its territory is on the area of 76,763 ha (189,686 ac).

High Tatras and West Tatras are consisted of granite. East Tatras (Belianske Tatras) are especially consisted of Triasic limestones and dolomits. In the past there were glaciers. Almost every valley in the Tatras was modified by these glaciers (for example the valley Roháčska dolina, the valley Žiarska dolina, the valley Veľká Studená dolina and the valley Malá Studená dolina). The water is very important here. More than 600 million m3 (784.77 million yd³) of water is taken away by the brooks during one year. Ground water is also a big source of water. There are about 110 lakes. Their area is 3 km3 and the bulk is about 10,000 m3 (13,079 yd3). Hincovo pleso is the largest and the deepest (20.08 ha/49.61 ac and 53.2 m/174.5 ft). There are also several waterfalls (for example the waterfall Skok, the waterfall Veľký vodopád and the waterfall Studenovodský vodopád).

The flora and the forests are very various. There are about 1300 species of higher plants, about 900 species of folds, 700 species of lichens and more than 500 species of mosses. About 40 species of plants grow in the altitude over 2,600 m (8,530 ft). Not every plant has the same origin. There are different endemits: the Carpathian ones, the West Carpathian ones or the endemits from Tatras. In the forests there are beeches, fir trees, pines, mountain ashes and the others. Dwarfed pines grow in the altitude of 1,800 m (5,905 ft). There is also a fern or a red whortleberry (and the others) and coloured snow. Its colour is caused by the certain species of folds or microorganisms (for example Chlamydomonas nivalis, Coliella tatrae, Rhizocarpon or Acarospora oxytona). There are several law protected plants.

The animal kingdom in Tatras is as different as the flora. Several species survived since the period of glaciers. There are some Carpathian endemits (fieldmouse, eagle, lizard and the others). Different species of owls (for example eagle-owl), carnivorous animals (falcon, raven and the others), small beasts of prey (weasel, polecat, marten or cat), big beasts of prey (bear, lynx, fox, wolf), and the deers, the roe-bucks, etc. live here, too. In the bigger altitude there is chamois and marmot (law protected).