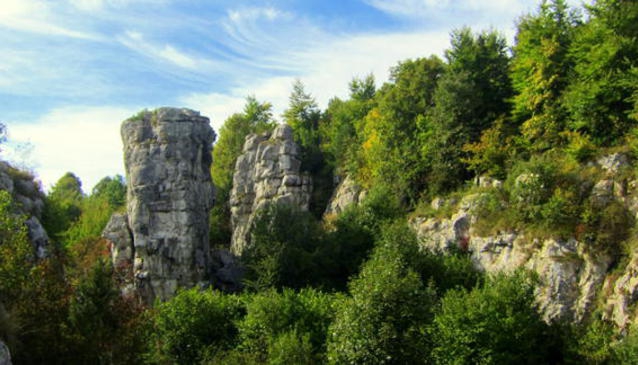 Visiting the region of Spiš, you will certainly be enchanted by a charming place that has been deservedly recognised as common human heritage.

Admired by the whole world thanks to UNESCO, this global treasure includes not only the Spiš Castle, the chapter Spišská Kapitula and the Church of the Holy Spirit in Žehra, but also the unique natural travertine formations of Dreveník and Sivá Brada.

The name of the travertine massif of Dreveník had probably been derived form a wooden fortress that used to stand on it before the Spiš Castle itself was erected. Even nowadays this significant archaeological locality reveals its secrets giving evidence reaching as far in the past as the times of the Neanderthal man. The mammoth bones, as well as items from Late Stone Age, Bronze Age and fotrified settlement era have also been found.

Travertine towers rising from claystone base create a kind of stone townlets and make a rock climbers' paradise. They influence fantasy of the people who often give them accurate names. One may thus take a walk to limestone towers situated at the eastern edge and known as 'The Stone Paradise', or to one of the most spectacular gorges called 'The Hell'. Many other rock formations, dolines, clefts, and ice and dripstone caves are also found there. The area is remarkable for its vegetation, too. Not only Dreveník, but also the neighbouring hill of Sivá Brada, covered with innumerable mineral springs, have become habitats of diverse legally protected fauna and flora.

Bizarre travertine rock formations and the ample occurrence of rare plants make Dreveník a popular place for hiking. This national landscape reseve is crossed with a moderate tourist path and the top of Dreveník opens a splendid view of the hill of Branisko and the Levočské vrchy range that make a unique natural background scenery for the Spišský hrad castle. If you prefer another type of experience, visit the Church of the Holy Spirit in Žehra with its highly valuable fresco called The Tree of Life, or the village of Spišské Podhradie and its St Martin Cathedral. Full of impressions and pleasantly tired, you may take a rest at the terrace of Spišský salaš restaurant that has been promoting traditional home-made Spiš specialities for many years.