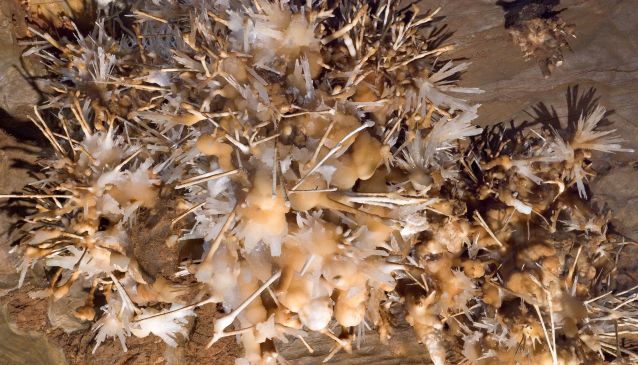 Ochtinská Aragonite Cave represents a unique natural phenomenon drawing attention by the richness and variety of aragonite fill, as well as an interesting evolution and development of cave spaces.

It is formed in a lens of Palaeozoic Devonian crystalline lime stones situated amidst non-karst rocks – phyllites. The entrance adit opens to cave spaces at 642 m (2,106 ft) above the sea level. Wedge upwards narrowing passages and halls were formed by corrosive activities of rainfall waters, which percolated along the distinct tectonic faults. Different shape have mainly horizontal passages and halls, which are located between tectonic faults. These originated mostly by corrosive activity of slowly flowing water in consequence of mixing waters of various temperatures and chemical composition, which is obvious by plentiful irregular niches and ceiling cupolas. Along the previous water table level, which later declined and stagnated for a long time, corrosive planated ceilings were formed (they cut out the lower parts of ceiling cupolas) and side corrosion notches on rocky walls.

Three generations of aragonite were determined in the cave. It is formed from water solutions with high content of Mg-, Fe- a Mn-ions under conditions of stabile microclimate. The oldest are milky translucent kidney-shaped formation and their corroded relics (dated age of 121- 138 thousand years) with partially recrystalized aragonite, in places metamorphosed to calcite. The second generation of aragonite prevails and occurs mostly in the form of several cm long needles and spiral helictites (dated age of 14 thousand years). These form cluster or dentritic formations (including so called cave flower or anthodite), which are most attractive for visitors. Aragonite of the second generation is still growing, by which it maintains the white colour and clean appearance. The youngest, contemporary generation of aragonite forms tiny fans with diameter of 2-4 mm/0.08-0.16 in (sometimes even more), sporadically creating miniature helictites with length not overlapping 40 mm (1.6 in).

Air temperature in the cave is between 7.2 and 7.8 ºC (45 and 46 ºF), relative humidity between 92 and 97%. Stabilizing of the cave micro climate is caused by ochres that contain 47-56 volume percent of water and they are able to absorb and release water vapor.