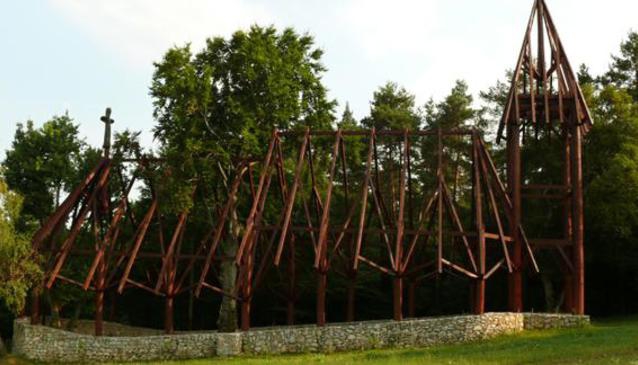 One of the priests from Jasov (Jászó in Hungarian), Domonkos Bátkay, who allegedly had come to this area during the reign of King Mátyás, has built a church on the clearing above the spring. According to historians the older part of the church was built in the 12th century, then extended in the 15th century but it has become completely ruinous in the 19th century. Only few lime stones left sticking out from the ground until the spring of 2006 when the local authorities commissioned the restoration of the church. The foundation of the medieval church was reconstructed and the rebuilding begun. Unfortunately, as the clearing and the surroundings of Debraď is a natural reserve, it was not possible to finish the project and only the base was actually restored. As a result a larch structure has been erected on top of the base following the silhouettes of the original church. The roof is open leaving way to the branches of the trees that have grown inside the church.