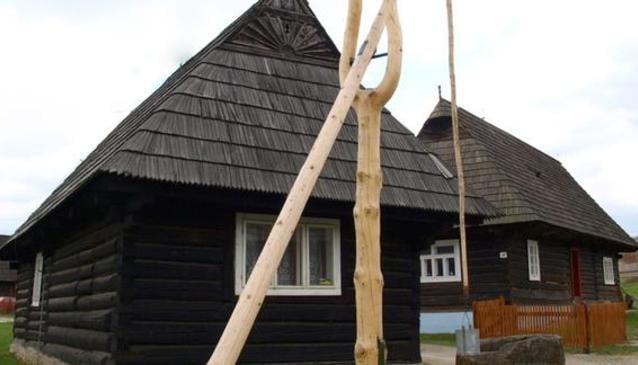 Directions to Reserve of Folk Architecture in Podbiel

The compound consists of 47 two or three room houses with shingle roofs and original ornamentation. The particular feature of these buildings is the ventilation opening shaped as chalice in the gable of the house.

The fundamental feature of homesteads is opened common yards. In the front part of the yard are two or three houses built in row with the corresponding farm buildings. Individual parcels ends by a perpendicularly situated barn. The log houses with saddle roofs covered by shingles stand on stone foundations.

Some wooden houses of this unique reserve have been restored in the 20th century. They offer an attractive accommodation to visitors.

An ironworks complex built in 1863, the so-called 'hámor' (in the vernacular), whose external walls and central blast furnace have been preserved, is located 2 km from the centre of the village. The TAVBA folk festival regularly takes place in this venue.