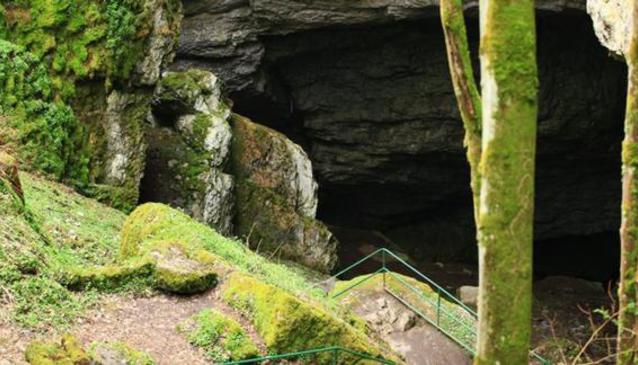 It is one of the most important natural phenomena of the Silická Plateau in the Slovak Karst. It is located 2 km (1.3 mi) westerly from the Silica village.

The lower mostly horizontal passages were formed by the underground stream of Cierny Brook. J. Majko entered the Archaeological Dome in 1931. The continuation of underground spaces along the Cierny Brook was discovered by Czech speleodivers in 1988. The cave is 1,100 m long and 110 m deep. It is formed in the Mesozoic Middle Triassic pale Wetterstein lime stones of the Silica Nappe. The waters of the Cierny Brook flow into the Gombasecká Cave.

The upper abyss part of the cave is permanently filled with ice. Breaking down the connection with lower parts formed a close depressive space with cumulation of cold air and formation of ice. It is the lowest lying classical ice cave up to the 50° of the northern latitude temperate climatic zone.

The Greater Mouse-Eared Bat (Myotis myotis) and Lesser Horseshoe bat (Rhinolophus hipposideros) stay in the cave during winter, sporadically with rare Natterer’s Bat (Myotis nattereri). The phenomenon of biological inversion can be studied here. Invertebrates are represented by several rare endemic forms of troglophilic species of beetles like Duvalius bokori and Duvalius hungaricus, which can be found only on the Silická Plateau in the Slovak Karst. Multipede Hylebainosoma tatranum is the Western Carpathian endemic species. The harvestman Ischyropsalis manicata can be found on cave walls.

The cave had been several times settled before the glaciation. Archaeological findings are dated from the Neolithic, Bronze Age and Laten Age. Possible is also young Paleolithic settlement. The drawing of J. Buchholtz is from 1719. The cave is mentioned in 1744 thanks to M. Bel.

A marked tourist trail leads to the cave. Fenced terrace gives visitors a view of the cold cave bowels. Movement behind fence and away from the trail is forbidden and dangerous.