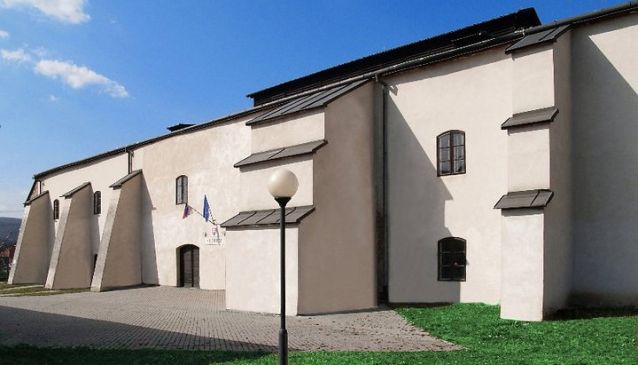 STM - National Cultural Monument Solivar is a complex of technical objects for pumping and boiling of salt.

The pan salt works at Solivar were proclaimed as the National technological monument in 1970. Their objects are situated in the built-up area of the village, nowadays suburb of the metropolis of Šariš - Prešov. In 1970 traditional manufacture of crystalline salt on the flat, open iron pans was finished here. A complex of the individual objects of the salt-works is managed by the Slovak Technical Museum in Košice that ensures renovation of its individual parts based upon the state financial support. Up to now, following objects were reconstructed and open for public - beater, shaft Leopold including 'horse gapel' and 'cheterna' (reservoirs of brine). The village of Solivar got its name by the salt salt sources situated under the foot of Slanské Hills.

Here, the utilization of brine (water solution saturated with salt) is dated from the 13th century about which there are historical documents. The amount of salt produced from brine exceeded consumption of inhabitants in this region, and thus it became the subject of beneficial trading. Since when, each following century has left lot of evidences about this fact (substantial and written artifacts). In the first centuries brine was drawn from salt sources-wells by means of winch. Crystallic salt was gained by evaporation of brine on the open pans. This simple process of manufacture was used also in the later centuries in so- called 'boiling rooms'. One of the oldest shafts that is preserved till now is the shaft Leopold. Out of originally built up and reconstructed objects, above all, Leopold shaft including 'horse gapel' and traction winch, 'cheterna' (brine reservoirs), boiling room František and beater are worth of seeing. 'Horse gapel' - hauling mechanism of shaft - was built in 1844. The object is of 8-sided pyramid shape with diameter of 14.6 m (15.9 yd). The hauling mechanism consists of vertical shaft (height 9 m/29 ft, diameter 0.65 m/0.71 yd) standing on the stone support. The whole equipment w s turned by 4 pairs of horses harnessed to 4 arms. At each arm there was one drover. A team of horses was changed after 4 hours. Wooden storage reservoir - tanks located in 'cheterna' (brine reservoirs) served for brine storage. The equipment built in 1815 has been preserved until now. Tanks are made of wood without using the only metal nail. Brine was originally processed in two boiling rooms - František and Ferdinand. The building burnt down on May 18,1986. The pan salt-works as a unique complex of technological and other objects is without competition in the field of technological monuments in Slovakia. Presently running reconstruction will enable to open it for public and to preserve it for future generations as cultural heritage.