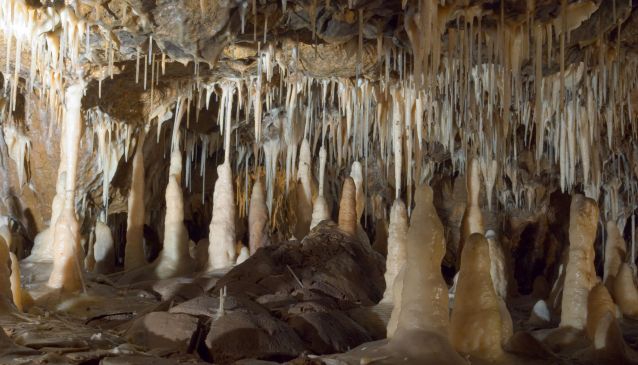 Though by length the Važecká Cave belongs among the short show caves, it is known by occurrence of rich drip stone decoration, remarkable findings of cave bear bones, as well as by rare cave fauna.

It is formed in the Middle Triasic dark-grey Gutenstein limestones of the Biely Váh Series of the Choc Nappe, by ancient submersible waters of the Biely Váh side branch. Cave length is 530 m (580 yd). Original river modeled passages are in several places reshaped by collapses, mainly along the interbed lime stone surfaces.

Underground spaces are decorated mostly by stalactites, stalagmites and flow stone pools. A large part of the cave is filled with fine-grained sediments from floods of the river Biely Váh and perhaps also from waters of the submersible water flow in half-blind valley in Priepadlá.

Air temperatures range between 6.5 and 7.1 °C (43.7 and 44.8 ºF), relative humidity between 94 and 96%. Entrance parts are influenced by climatic changes on surface during the year, which are demonstrated by frost weathering of lime stones.

The cave represents an important palaeontological finding place of cave bear bones (Ursus spelaeus). From among cave invertebrates, the finding of Eukoenenia spelaea is remarkable and unique and means the northernmost occurrence of a representative of this order of palpigrades, by what the Važecká Cave ranks among the biospeleological localities of the European importance! Sporadic occurrence of several bat species was recorded in the cave.