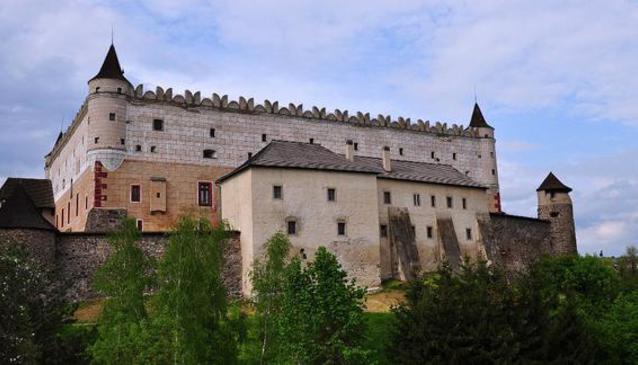 This Gothic castle with the Renaissance fortification is situated on the mild hilltop at the southern part of the square.

It was built by King Louis the Great of Anjou in the last third of the 14th century as a hunting residence in Gothic style to resemble Italian manor houses.

The castle had several owners. King Matthias Corvinus with his wife Beatrix liked to come here, it was also a residence of Ján Jiskra of Brandýs, and it was kept in Ján Thurzo's possession as well.

On the ground floor there are the most precious rooms with the stone rib vaulted ceiling lit up by narrow apertured windows. In its eastern wing there is situated originally Gothic two-storey chapel with beautiful portals. The first bigger reconstruction in 1491 – 1510 added the outside stony fortification to the castle. Since 1548 the Renaissance reconstruction of the castle has started. The castle was made one floor higher, corner oriel keeps were built to it, the third storey was equipped with shooting openings and completed by the attica.

In the second half of the 18th century the castle experienced the second distinct reconstruction. During this Baroque reconstruction was created the coffered ceiling in the Royal Hall with the portraits of 78 Roman emperors. It had been the king's possession till the middle of the 17th century.

Nowadays Zvolen Castle is a national cultural heritage and it is the seat of the Slovak National Gallery.