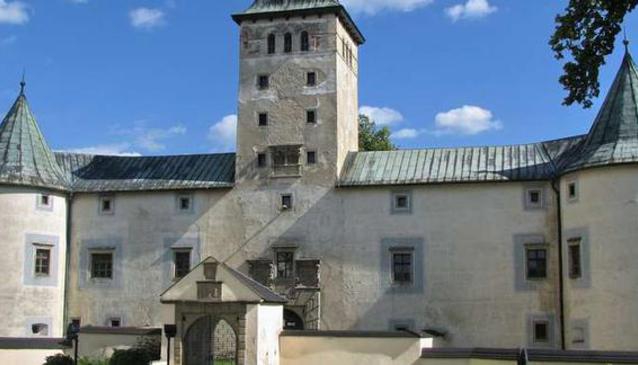 The impressive Renaissance castle was built in the place of an older building (a water castle) from 1571 to 1574 for the Hungarian Palatine Juraj Thurzo by his father František Thurzo.

The Italian architect Ján Kilian of Milano was invited to oversee the construction. George Thurzo continued his father's activities and due to him the Wedding Palace was built in 1601, which was meant to serve for the weddings of his six daughters (he only had one son Imrich).

From more decorative details (decorations of portals sgraffito framing of the windows, the similarity of the original chimneys, which were very similar to the chimneys in the castle), it can be concluded that the palace is the work of Italian masters who lived in Bytca. They probably included a mason master named Antonio and a stone cutter named Pocabello.

The building is embellished by rich sgraffito figural and floral ornaments around the stone windows and portal. Inside the one-story, rectangular building is a particularly interesting foyer on the ground floor and a large Wedding hall (34.5 x 12.5 m/37.7 x 13.7 yd) on the first floor, which was for a longtime the largest of its kind in Slovakia. The premises of the Wedding Palace and castle often witnessed the opulent weddings of Juraj Thurzo's daughters and the majestic funerals of the Palatine himself and his wife.

Tradition is that these marriages lasted maybe a year, unless a descendent was born. They are, however, unsubstantiated claims. From the journal of Juraj Thurzo from 1612, we have learned that the marriage of the youngest Palatine's daughter Barbara lasted no longer than a week.

There were two pharmacies, a school, a typing office, a library and an assembly room in the castle. In the eastern part of the castle there was the so-called big hall, intended for assemblies during the reign of George Thurzo. In the northern part there was a castle treasury, which was later turned into a chapel by the Eszterházy family. After the Thurzo family had died out at the beginning of the 17th century, the castle was acquired by the Eszterházy family, who converted it into a farm building. In 1862, the property was bought by the Popper family of merchants, who transformed the castle into flats and the Wedding Palace into a district court.

Ján Ujváry, also called Ficko, Elizabeth Báthory's helper was also imprisoned in Bytca castle. At the beginning of the 18th century, the legendary Slovak outlaw Juraj Jánošík served as a prison officer in the castle. He helped the imprisoned Tomáš Uhorcík escape and they created a forest robber group. This is why this national heroes' legend might have started in Bytca.

The jewellery of George Thurzo and his family were collected and kept in two treasuries of the castle, one was on the ground floor, the other on the first floor. Their contents matched the status and wealth of perhaps the richest family at the time.

The Thurzo family received income from four estates (Bytca, Lietava, Orava and Tokaj) and from trading in wine, salt, shingles, and furs. They also had a monopoly on buying Polish salt that they transported on rafts up to Bytca, and from there up to the outlet location. In addition, Thurzo received fees of 1000 golden coins per year for his function as palatine. In comparison, one calf cost at that time one golden coin. His salary was therefore equal to 1000 calves.

The treasuries had iron doors and windows with bars. Only the owners and family members could enter the castle. From the staff, just loyal persons and only in the presence of the owners. The jewellery was placed in chests. When the castle was threatened, the treasury was moved to Lietava Castle along with the archive and the library. Treasures of other families were hidden there too.

Juraj Thurzo used to buy jewellery in Vienna and Prague. During the reign of the Eszterházy family, the treasury ceased to exist. The treasury upstairs was changed into a chapel by Mikuláš Eszterházy and the downstairs one was set up as a storehouse for various perquisites. However, Thurzo's valuables were already in the hands of the Palatine's daughters, who had previously left Bytca.

The Thurzo's library was rearranged in 1610 by professor Hammel from Košice. That library belonged at the time among the remarkable and relatively well equipped libraries not only because of its number of books, but also because of its contents. The catalog of professor Hammel from 1610 recorded the names of more than 800 volumes on history, medicine, law, theology, mathematics, but also cosmography and astrology.

Such as 'The History of Persia' by Peter Bizar, 'The History of the Romans' by Alexander Appiani, and works of Aristotle and Socrates. The library of Juraj Thurzo documents the degree of education of the then ruling class of feudal lords, which was, however, very varied. Interestingly, the second wife of George Thurzo, Elizabeth Czoborová, was not able to read or write and learned it only from George Thurzo himself.