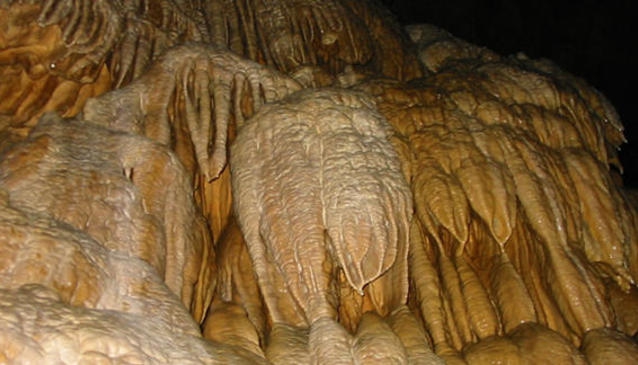 The Dead Bats' Cave (Jaskyna Mrtvych Netopierov) is located in the center of Slovakia in the high mountain karst of Dumbier (1,750 m/5,741 ft altitude), in the central part of the Low Tatras (Nízke Tatry) range.

The volcanic rocks from the chalk era are wrinkled into calcite strata which is one of the unique curiosities of cave. They appear at many places in the cave corridors, where they capture the public’s attention with their brown-red or green color. The volcanic rock contains agate crystals of a pink-white shade.

The bones of dead bats are found almost everywhere in the cave. This is another unique characteristic of the cave which gave rise to the cave’s name. Some of the bones are estimated to be 6,000 years old. In the peripheral part of cave are also found remains of martens, bears and even goats.

Visit the Dead Bats' Cave and become a caveman for a while. Equipped with speleological clothing and a helmet with miners light, you have the unique possibility to peep into mysterious underground of the Low Tatras (Nízke Tatry). In this dark, humid and cold world which has a healing effect on the bronchial system, you will be taken back almost twenty million years in perhaps the oldest cave in Slovakia. Take advantage of this opportunity during your visit to the Low Tatras, Liptov or Horehronie areas.

The cave is located in a mountain landscape in the National Park of Low Tatras. Visitors are therefore required to have good mountain footwear as well as good physical fitness. Due to environmental protection reasons, cave sight-seeing is limited only to pre-booked visitors up to a maximum number of 10 people.