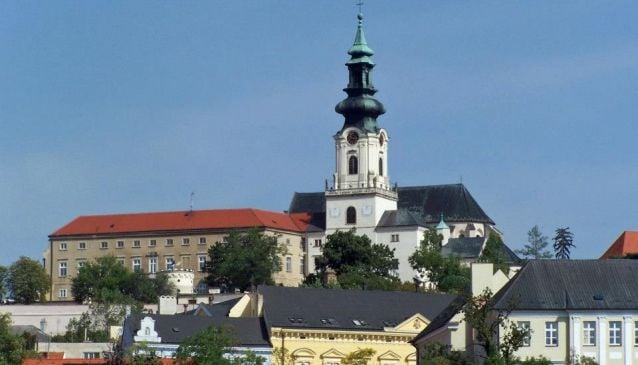 The dominant of the oldest Slovak town Nitra is the Castle of Nitra. It was built in the 11th century on the site of a bulky Slav fort, the seat of the Nitra Princedom and Great Moravian rulers.

The Nitra Castle is a National Cultural Monument consisting of four individual parts. Castle Fortification – the present fortification has been gradually constructed through the 16th and 17th centuries. Bishop Pálffy ordered the massive wall to be built in 1673, during the reign of Leopold I (the Latin writing above the entrance), as a precaution against the Turks. It is a star-shaped fortification system with five impressive bastions. On each of the bastions there is a stone carving portrait of one of Leopold's commanders.

The Cathedral – consists of the Upper and Lower Churches and was built in 1333 – 1355. In 1711, Bishop Erdody had the interior modified to Baroque style by D. Martinelli, an Italian architect. The frescoes on the vault were created by the Austrian painter Galliarti and represent one of Slovakia's most valuable Baroque temple interiors. Inside we also find a rare Baroque altar dating from 1662 and a Renaissance baptismal font dating from 1643. The Lower Church was added in 1621 – 1642 and its most interesting part is the altar of the Removal from the Cross by the Austrian sculptor Johann Franz Pernegger.

St. Emeram's Church – the Romanesque style small church is the Cathedral's oldest part. Originally built in the 11th century, it was later modified using Gothic architectural elements and its present appearance is the result of a reconstruction in 1931 - 1933. The site is considered one of several possible locations of Slovakia's first Christian temple built by Pribina. St. Emeram's is the place where the remains of St. Andrew, St. Benedict and St. Constantine – Cyril are held.

Bishop's Palace – is built upon medieval foundations and its present appearance results from several centuries of development. The last Baroque modifications were made in the 18th century. The 1924 fire destroyed a part of archives and the roof of the palace. Today the palace is serves the Bishop's Office.

Service buildings – were used for diverse housekeeping purposes and are located in the castle's courtyard. The round tower is a remnant of medieval fortification with a neo-Gothic upper part dating from 1857. The entrance gate is a Renaissance structure that includes chambers for the garrison's commander. The building just above the entrance gate was built around 1600 and the castle's courtyard also included stables, storages and service personnel housing.

Vazil's Tower – is another remaining part of the medieval fortification. According to a legend, Vazil, King Stephen's nephew, was imprisoned in a dungeon supposed to be in the tower's underground.

The cathedral is open: