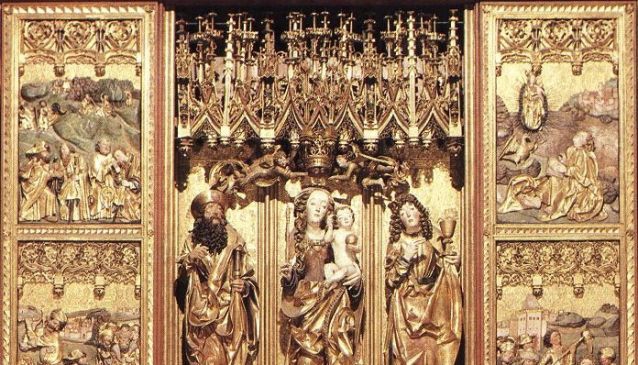 The most important as well as most unique monument of the town of Levoca is the St. Jacob Church with its 11 Gothic and Renaissance wing altars, including the highest wooden Gothic altar in the world!

Only two towns in Europe - Levoca and Bardejov (both UNESCO towns) can boast of a collection of twelve Gothic altars of own provenience, standing mostly on original locations.

The entire system is composed by circles and triangles, and therefore it appears extremely balanced. Each thing has its place precisely defined. The main statues in the altar box represent Madonna with a child in her arms, standing on a half moon with the head of a demon; St. Jacob and St. John, already in heaven.

The seriousness of sculptures' position is emphasized by their dimensions. Madonna is 2.47 m (8.1 ft), St. Jacob 2.32 m (7.6 ft) and St.John is 2.30 m (7.5 ft) high. These giant statues were made from one piece of linden wood. The altar's predella represents the Last Supper at the moment when Christ said: 'One of you will betray me'.

The front wings of altar's extension are decorated with reliefs, the back wings with panel painting. Because the height of the arch sanctuary a higher cupboard was required, therefore Master Paul filled the altar's extension with rich pinnacles and canopies.

It is almost unbelievable that such a huge piece, made of flammable and by pests easily challengeable wood survived as many as 500 years. Moreover, the church was repeatedly burning in the past, often threatened by war and uprisings and seriously damaged by woodworm. The altar was repaired several times in 1654, 1752, 1861 and 1951-1954.